CALL TODAY FOR A FREE CONSULTATION 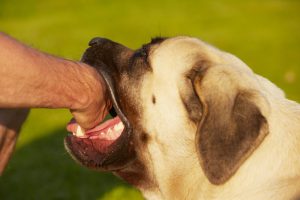 If you or a loved one has encountered a dog bite and the injury is serious seek medical attention immediately.

It is also important to understand that some investigation on your part will greatly help your legal case and, try to follow the following:

After a dog bite injury is reported the local animal authorities should come and pick up the dog and place and place it in quarantine.  Usually tests are done on the dog to see if the dog has rabies or any other diseases.  A report will be generated and you will need to get a copy of that as soon as you can.

If this dog is a repeat offender or has otherwise been picked up by animal control before, there probably are records of the event and you will want to get copies of those records too.

It is important that the dog not be put to sleep so that you can have an expert evaluate the dog.  If the owner or animal control tells you that they are going to put the dog down, an attorney can get a court order to prevent this in order to allow the examination of the dog first.  The examination would be for the purpose of determining whether the dog had clear dangerous tendencies that the owner should have been aware of.

If you can take photos of the dog, in a safe way, do so as soon as possible.  The photos help to prove that this exact dog was the one that injured you.  Also, take photos of the place where the injury occurred so that, whether it was at a park, on the street, or in the dog owner’s home, so that we can get a good representation of the scene of the injury.

Obviously, witnesses are very important.  Try to get statements from all people who saw the bite.  Ask them if they saw or heard the dog growling; if the dog was being aggressive or hostile; or any other things that they may have seen or heard before the bite occurred.

Similarly, get statements from neighbors of where the dog lived.  Find out what they know about the dog and if they had ever observed the dog acting aggressive in the past.

Get the name and phone number of the homeowners’ insurance policy so that you can file a claim.  If the dog owner refuses, try to reason with the owner and explain the reason for having a homeowners’ insurance policy is for events such as this and that providing the information is for the benefit of everyone involved. Contact us at Joseph C. Crudo, PLC today with any questions you might have.